Part 6 – Skinning the Hull; Decks, and Superstructure
There’s a lot of good material out there about how to skin a ship’s hull, so we won’t go into all the details of how to do it.  Instead, in keeping with the themes of this series, we’ll discuss what actually happened, including some false starts and mistakes.

Basically, skinning sounds pretty easy – and it is.  1/16″ balsa is nice and flexible to start with, and soaking it in a dilute ammonia/water solution made it even more so.  4″ wide sheets should cover from the water line down to the keel.  A couple of problems, though:

Figure 1.
Compound Curve.
The solution I settled on called for abandoning the 4″ sheets, in favor of 1″ strips.  This was particularly handy since, as mentioned earlier, the wider sheets tended to de-laminate anyway.  The narrower strips could be easily bent and twisted to conform to the hull shape as defined by the ribs quite naturally.  Once the first strips were attached, it was apparent that subsequent strips would overlap them at either end of the ship – this was addressed successfully by tapering the strips.  Once a strip is attached securely, the next one was fitted up and the appropriate taper cut out of it with an Exacto knife.  Figure 2 shows how parallel, tapered strips line up next to each other on a flat surface.  It’s easy to see how drawing the tapered edges together pulls the entire skin into a natural hull shape.

Lots of small clamps, clothes pins, and twine were used to hold the strips tightly onto the ribs while glue set.  Soaking the balsa sheets/strips turned out to be unnecessary – a few swipes with a wet sponge made them more than supple enough to bend any way I needed them to.  One strip at a time was set, then the clamps removed and another strip installed.  While this was all pretty easy, it took several evenings to get it all done, allowing for ample setting time between each strip.  I started at the waterline, working up and down from there.  This allowed me to keep track of the waterline easily, since I always had the seam as a reference.

Solid balsa blocks were carved for the extreme bow and stern.  For the bow,  a 1/8″ plywood stem was attached to the ‘A’ rib and keel, to define the shape of the prow.  Port and starboard halves of the ‘A’ rib served as patterns for balsa blocks on either side of the stem, and these were formed with a rasp and sandpaper.  The stern used a solid block only for the curve where the transom meets the underside of the hull.  For a ship with a rounded stern, the same technique as the bow should work nicely.  The completed hull was treated with Thompson’s Water Seal, then cracks and gaps filled with 222 light spackle and the whole thing sanded smooth.  At this point in the process, the hull was very susceptible to damage – I lost track of how many times I poked a finger through it, just in the course of ordinary handling – lots of opportunities to practice repairing battle damage!  Two coats of clear dope were applied, then lightly sanded, which improved the strength (& resistance to inadvertent damage) tremendously.

Silkspan created a problem that I could have done without.  After getting the whole thing smooth and even, the compound curve issue came back to wreak havoc on the silkspan!  This time, applying the two-dimensional silkspan sheets onto the three-dimensional, compound curved hull left it full of wrinkles!  It was a major pain to have to sand it all off of there!  Reapplied in strips, the wrinkles were eliminated, but it took a week’s worth of evenings to get back onto the normal construction schedule!  I’ve heard of other folks silk-spanning the inside of the balsa sheet before attaching it to the hull – I’m not sure how to do that, while still keeping it flexible, unless it’s bent to shape before attaching to the ribs.

Finally, a couple coats of spray primer to give it that nice warship gray look.  I masked off above the waterline, and sprayed the underside with Testor’s flat red (looks nice!)

One other problem came up in the skinning:  The area around where the propeller shafts exit the hull, the standoffs, and the clearance for the props themselves, had to be adjusted.  Several small pieces were needed to fit around the standoffs.  The stuffing tubes should have been a little longer, to clear the hull skin.  As it was, I created recesses where the shafts exit by cutting away hull skin immediately abaft the stuffing tubes.  Small pieces of sheet balsa were placed inside the outer skin and around the stuffing tube, with spackle and sandpaper used to smooth it all out.  A similar technique was needed above the screws – you just need to allow for the buildup of dope and paint, and account for it when placing the screws!  I’m not even using the oversize screws that would be allowed, and it was a tight fit.

The superstructure and upper works contributes absolutely nothing toward making the ship fight, or even sail, any better.  In fact, too much weight too high up can make the ship unstable.  Trying to make the ship look good adds fun to the project, I think.  However, we’re not building a model that’s going to be inspected closely – this is supposed to be a fighting ship!  It’s going to be seen mostly from distances of about 20 feet on out, so small details that don’t show up at that viewing distance are a waste of time.  Not to mention, it’s just that much more stuff to get shot off in battle!  I came up with a general method that looks good, but also is easy to build and can be assembled quickly so that my time could be spent doing things that will have a real effect on the ship’s handling and battling properties.

Major superstructure parts were cut while the hull frame’s epoxy glue was setting up.  These pieces were cut from solid balsa blocks, with 1/16″ plywood used for decks.  This was really very easy, but you need to be able to translate two-dimensional plans to three-dimensional objects.  Figure 3 shows some details that are typical of ships’ plans: 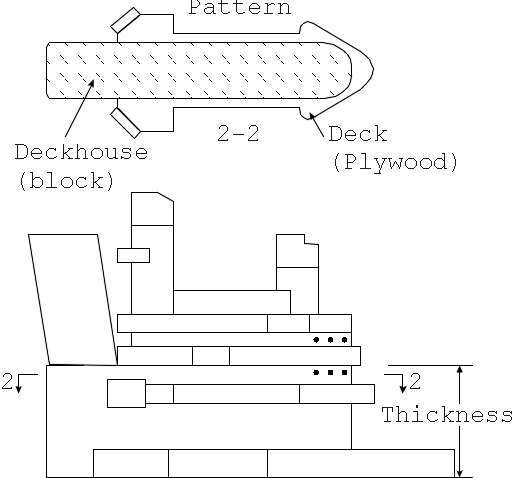 Some details have been omitted, for the sake of clarity.

The key is to understand the standard drafting nomenclature used in the plan.  In the lower image (which is an excerpt of the Profile view), note the arrows on either side, pointing down, with the number ‘2’ next to them.  What these mean is that you should imagine that the object has been sliced, in this case horizontally, at the line that connects the bent arrows.  Then, find the detail view in the drawing with the ‘2-2’ label, and this will show you what the object would look like, looking in the direction of the arrows, from the plane of the slice.  This detail provides a two-dimensional pattern to cut out of a block of balsa, foam, or other material.  The third dimension, the thickness of the block, can be determined by measuring from the deck immediately above the section, to the last deck below, or where the block changes shape.

Figure 3. is a simplified representation of CA-72’s superstructure plan.  The block itself was very easy to carve, about 6″ long by 1-1/2″ wide, by about 2″ thick.  Rounded corners were sanded in the after end, and the forward end was rounded off completely the same way.  A horizontal slice was cut into the block, from the forward end, about 3/4 of the way back, the deck piece slid into it and glued into place.  Subsequent decks and blocks were cut and stacked up to complete the superstructure.  A later addition, to add a touch more realism to the looks, was splinter shields around all superstructure decks.  These were made by cutting 3/8″ strips of poster board, painting them, and bending to fit around the perimeter of each deck.  Excess was trimmed off, and the shields were glued to the decks.  The effect ended up looking nice, I think, and was very simple and quick to install.

It was very difficult to resist cutting out main deck sections at the earliest possible moment.  When that hull frame is setting up, it just seems like the natural thing to do.  However, some mistakes were made and it was necessary to cut these pieces a second time.

I broke the main deck up into what seemed like logical sections.  A main center section, with the two superstructure pieces screwed on from the underside (this allows the superstructure to be easily replaced if/when it gets shot up so much that it doesn’t look good anymore!).  Most of the things that need to be touched often – batteries, switches, regulators, etc. – were to be located under this area.  Three other deck sections cover different areas of the ship, with each held down by 6-32 cap screws and captive nuts embedded in the cap rail.  The center section has three cap screws on either side that need to be installed when the ship is launched.  This adds about a minute to the ship’s preparation time.

Locating the holes for the cap screws and their captive nuts was easy – just clamp the rough-cut deck sections into place and drill down through the deck and cap rail.  Locating holes for the turrets was a little more challenging, particularly the adjacent #1 and #2 turrets.  However, if the distance between the pair of turrets is set – and it should be – you can cut these holes first, before the mounting holes are drilled.  With the turret holes cut in a rough-cut deck section, I set the section down onto the cap rail and aligned it with the forward cannons.  Thus aligned and clamped into place, the attachment holes could be drilled where they needed to be, and the deck section trimmed to fit.

As noted, though, I made a mistake that required a new deck section to be installed.  This time, I didn’t want to re-drill the mounting holes – I wanted to match the new deck’s holes to the holes on the cap rail.  Fortunately, I came up with a solution:  As before, the distance between the turrets was already set.  I cut a pair of holes of the appropriate size and relative position into a piece of poster board.  The poster board was laid over the cap rail, aligned with the cannons, and taped into place.  A scribe was used to locate the holes in the cap rail, and poke holes through the poster board.  The poster board was then used as a pattern to place all the holes on the new deck section, which was cut over-size as before.  Once all the holes were cut into the new section, it was attached to the hull and marked for final trimming.