It’s a good idea to have a working knowledge of how Radio Control (R/C) systems work. One doesn’t need to be an Electrical Engineer (EE) or Radio Frequency (RF) guru to make off-the-shelf R/C systems work. Fortunately, most of the heavy lifting has been done for us. Still, most R/C systems need to be adapted in some ways so that they can be used to operate a fighting combat ship.

Most R/C systems with enough channels for model warship combat are designed to be used with aircraft or helicopters. This is just a simple fact of life in the R/C business – that’s what the greatest demand is for, so that’s what gets built. Limited angular motions are used to control ailerons, rudders, flaps, elevators, and throttles, while landing gear is always in 1 of 2 positions. That’s really all that a R/C system does, is to convert a range of motion on an input into a range of motion on a remote device (usually a control surface in aircraft). Almost all radio systems available today are 2.4ghz, which offers many more available frequencies (allowing for more RC vehicles to operate simultaneously). The challenge is to adapt this system to a use for which it was not designed, and is not necessarily optimum.

A R/C system converts a mechanical action in one location to a mechanical action at another location. The action of moving a stick, turning a knob, or flipping a switch on the transmitter in your hand needs to be converted into a rudder movement, throttle position, rotating a turret, elevating barrels, firing a cannon, or turning a pump on (or off) in the ship. The R/C system does this in several steps:

Figure 1 illustrates this sequence of actions:

The above sequence is repeated 50 times each second in a typical R/C system which provides a smoothness of motion much like the repeating still images of a movie.

As already noted, the gimballed sticks that are common input devices on R/C transmitters are actually rotary position sensors, not linear as they appear. If you open the transmitter case and examine each gimbal you’ll see that the stick rotates on a pair of shafts that are perpendicular to each other, and these shafts are attached to potentiometers. Mechanically, operating a stick has the same effect as turning two knobs.

A potentiometer can be thought of as a variable “T” resistor network. A “T” network is shown in Figure 2.:

One side of the network is connected to the common 0V point reference (“ground”) and the other end is to the +5V supply voltage. The voltage at the “Tap” will be some value between 0V and +5V, depending on the values of resistors R1 and R2. The resistance between 0V and +5V will always be the same.

A potentiometer is constructed of resistive material with a terminal at each end and a “wiper” in the middle. The terminals of a potentiometer are connected to 0V and +5V just like with the fixed resistor network. The wiper completes the tap of the “T”, but unlike the fixed network, the wiper is free to move across the resistive material as the knob is turned. Changing the point where the wiper contacts the resistive material changes the relative resistance between the wiper and each of the terminals, while the resistance between 0V and +5V remains constant as with the fixed network. Potentiometers are rated in Ohms, representing the total resistance between the fixed terminals. Because potentiometers provide an infinite range of resistances between 0 ohms and the total rated value, when placed in a “T” network the wiper provides an inifinite range of voltages between 0V and +5V. Reading the voltage level at the wiper tells you what it’s physical position is, which is how the transmitter tells where you have moved the stick or turned the knob.

Switched inputs are created by using a fixed resistor network but adding some switches to make it variable but limited to certain preset values instead of infinitely variable over the complete range resistances that a potentiometer provides. Figure 3. shows a modified “T” resistor network:

In this circuit, the resistance between 0V and the tap, and +5V and the tap, changes depending on whether SW1 or SW2 is closed. This is exactly how a proportional channel can be changed into a switched channel, typically for firing guns more conveniently than moving a stick or knob. To convert a channel, remove the existing potentiometer and measure the resistance across its terminals with an Ohm-meter (5K-Ohms is typical). Usually, a black wire (0V) will be connected to one terminal and a red wire (+5V) to the other, with the wiper connected to some different-colored wire. This tells you the total resistance needed as R1 + R2. Making R1 and R2 themselves variable makes it simple to “tweak” the control so that the position of the servo is correct for either button pressed as well as no button pressed.

The R/C system can be considered to be a “chain”, starting with mechanical motions on the input end and finishing with similar mechanical motions at the output end. In between, various conversions, consolidations, and separations occur. Most of what happens in the middle, we have no control over and only a passing interest in.

The transmitter takes inputs in the form of voltage levels corresponding to control position and convers them into square wave pulses of variable width. The widths of the pulses correspond directly to the input’s position and electrically represent either an “on” (0V) or “off” (+5V) state. Pulse widths are the time between a transition from low to high voltage. For most R/C systems, a 1.5 msec. pulse width represents the input’s “center” position, with 1.0 msec. and 2.0 msec. representing the opposite extremes. Various devices can be connected to one of a receiver’s outputs and convert its output into some physical action. The most common device is a servo, but electronic speed controls and switches can also be used.

A servo is a small electric motor connected to a geared transmission. The transmission reduces the speed and increases the torque available to its output shaft. The output shaft is connected to a potentiometer that provides a voltage-level feedback to the servo’s electroncs in exactly the same way that a transmitter identifies input control position. The servo generates a pulse based on its own potentiometer’s position and compares that pulse to the one received from the radio. Depending on whether the feedback pulse is the same width, longer, or shorter than the input pulse, the electronics cause the motor to run in one direction or the other, or stop. Because the input pulses arrive very 50 msec., the servo is constantly getting new instructions and can match the related input control’s movements almost instantaneiously. Disconnecting a servo’s output shaft from its feedback potentiometer is the basis for all servo “hacks” that turn a servo into a continuous-rotation device. Because the potentiometer is disconnected, the servo “thinks” that it is always “centered” and all commands to move one direction or the other are executed forever since the feedback pulse will never “catch up” to the input pulse.

Electronic speed controls work much the same as the control boards in a servo, but without the position feedback. They plug directly into a receiver’s output channel and provide continuously-variable power levels to electric motors, with forward and reverse.

Circuits are available commercially, or can be built, to convert a PPM signal into a switched output. As with the servo, such circuits usually involve generating a fixed-width pulse representing one of the control extremes and comparing the input pulse to the fixed pulse to determine whether or not the control has been activated. A full “throw” in one direction can trigger a relay, while a full throw in the other direction can trigger a different relay. Combining a contact-closure on the output end with a switched variable network on the input end is one way to perform functions such as firing cannons with convenient push-button switches.

Hobby servos can be used to perform a variety of mechanical functions in addition to the operation of ailerons, elevators, rudders, throttles, etc. that they were designed for. Various linkage parts are available to convert a servo’s rotary motion into linear motion. It’s also fairly easy to use a servo to operate electrical switches or pneumatic valves to perform various ship-board combat functions. These can provide a variety of highly reliable functions without costing a lot of money or needing advanced skills.

The traditional linkage used in most servos for aircraft, boats, cars, etc. involves a rod connected to the servo’s wheel or arm by a clevis. Rotary motion of the servo is converted to linear motion of the rod. In a combat warship, this kind of linkage is commonly used to turn rudders or elevate barrels. 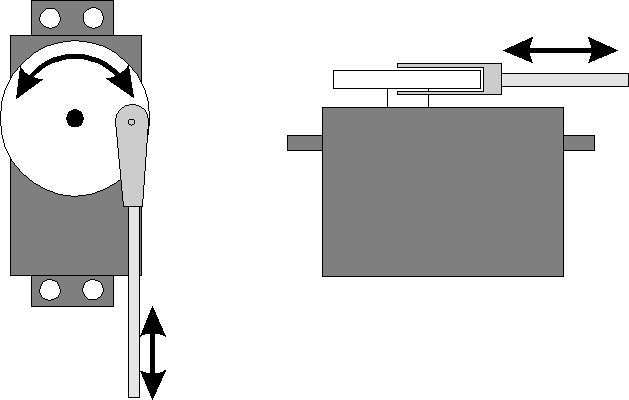 A servo can also be used to operate one or more switches. Figure 5 shows a typical setup where a portion of a servo wheel has been cut away, to make contact with a pair of snap-action switches. This arrangement is typically used to switch drive motors between full forward and full astern, with the center position being “neutral”. 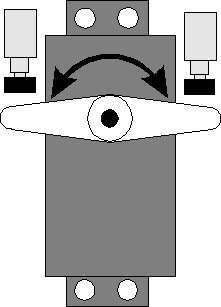 Many components of radio control systems are interchangable between brands. Some awareness of differences can be a big help. The following sections outline some of the considerations that should be made when selecting R/C equipment.

Servos, ESCs, and other devices can generally be used with any radio system. However, the pinout and connector shapes are often different between manufacturers. Adapters can often be found at a hobby shop, to use one manufacturer’s servo with another manufacturer’s radio if necessary. It is also possible to rearrange the connectors or even snip the connectors off and attach a new one. The following table shows several common manufacturers’ servo connector arrangements:

In general, FM is preferred because it is more resistant to most common types of interference. AM, because of its nature, can be interfered with by any transmission on the same frequency that overpowers the R/C transmitter, such as police, fire, commercial, or CB radios, etc., even things like automatic doors. PCM is usually found only on more expensive computer radios, and is very resistant to interference. AM vs. FM vs. PCM is not dependent on channel – any channel can be modulated in any way.

As noted above, FM radios modulate their signals by shifting transmission between two frequencies. This technique is called “Frequency Shift Keying” and is commonplace in data modems as well. One frequency represents the “no pulse” state, while the other frequency represents the “pulse” state. The amount of time that the pulse is “on” corresponds to the length of the pulse generated as a result of the input control position. Whether the pulse is “high” or “low” relative to the main “carrier” frequency is referred to as “positive shift” or “negative shift”. Figure 7 illustrates the difference between positive and negative shift: