Most captains equip their ships to fire using mechanical poppet valves (Clippard SMAV-3) as pilots for their MPA-7 or MPA-5 actuators. Opening the pilot valve with a servo allows pressurized CO2 to reach the actuator, which in turn pushes open the main firing valve in the turret body, firing the gun. This is a simple method, tried and true. The mechanical/pneumatic operation is easy to understand, easy to troubleshoot, and very reliable. An example of this system is documented in Safe, Effective CO2 Delivery.

An alternative, mechanical/electrical/pneumatic approach is to replace the mechanical SMAV-3 poppet valve with an electrically-powered solenoid valve, such as the Clippard E[C|T|V]-3-[6|12|24]. Note that this is a 3-way solenoid valve, not a 2-way. The 3-way function is essential, to make sure that pressure bleeds off when the firing control is released. A mechanical/electrical switching method can be used, similar to what most captains use to control their propulsion, as shown in Figure 1, below:

Figure 1.
Solenoid Valve Fired By Servo-Operated Switches.
Again, it’s pretty simple and reliable. One might ask, though, “What’s the advantage of doing this versus a mechanical/pneumatic system?” It’s hard to see the point, really. One could use a much smaller servo to operate the switches, since they don’t have to overcome the force of gas pressure behind poppet valves. Other than that, there really isn’t much advantage.

An electronic/pneumatic system takes the idea one step further. Rather than using a servo to operate switches, which in turn operate solenoid valves, the mechanical/ electrical element is replaced with an electronic circuit. This adds the advantage of fast actuation, since there’s no mechanical lag while the servo swings into position. The trade-off is complexity and reliability. An electronic circuit introduces quite a few additional components into the system, which means that there are more potential points of failure. Also, most people probably think that they don’t have the skills to design and assemble an electronic circuit. They may be wrong about the assembly part, at least, and the following design is offered to those who want to give it a try.

This circuit is based on the Optoglow II glow plug driver at Brent’s R/C Electronics Page. The Optoglow II is an optically-isolated driver for an inductive load, that is controlled directly from a standard R/C receiver output channel. The original circuit was designed to operate only one device from a channel, but here we have it adapted to operate a second as well. This way, two different turrets may be fired from the same channel, one via each opposite throw of the “stick” or other control, like most people are used to when servos and poppets are used. We’ll leave the detailed circuit description to Brent. Our modification is to basically double the circuit, with a shared input. The original circuit has a jumper to select whether a “forward” or “backward” throw powers the load. This feature is retained, and the jumpers should be set to opposite positions to provide dual firing. In addition, each “channel” has a “Test” switch added, allowing the captain to test fire either of his turrets without having to have the radio turned on. Figure 2 shows the dual firing circuit schematic:

All component quantities are doubled, except for R1, a 47K resistor between the servo pulse input and ground. Otherwise, the right and left sides of the circuit are identical, and consistent with the original. As noted, assembly can be done using a small prototyping board. A printed circuit board could be built to reduce the footprint a bit, if desired. Figures 3 and 4 show a possible assembly layout, top and bottom respectively: 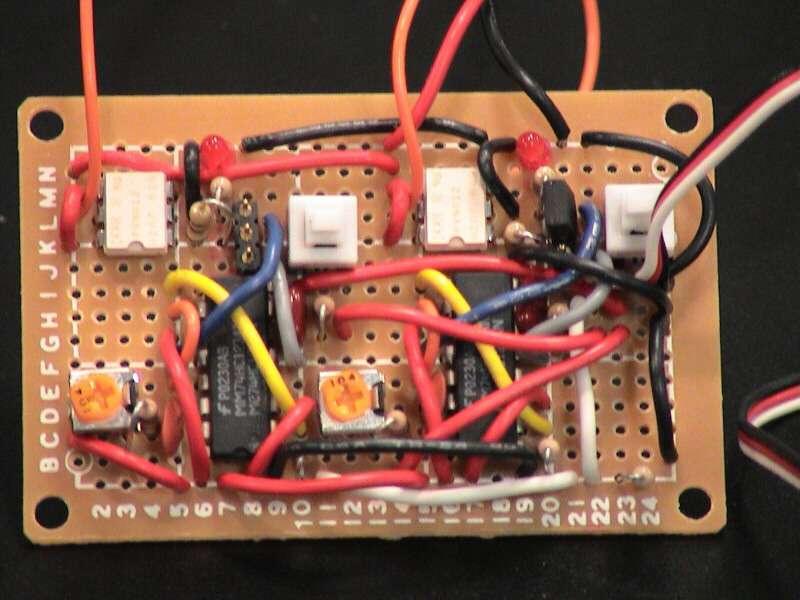 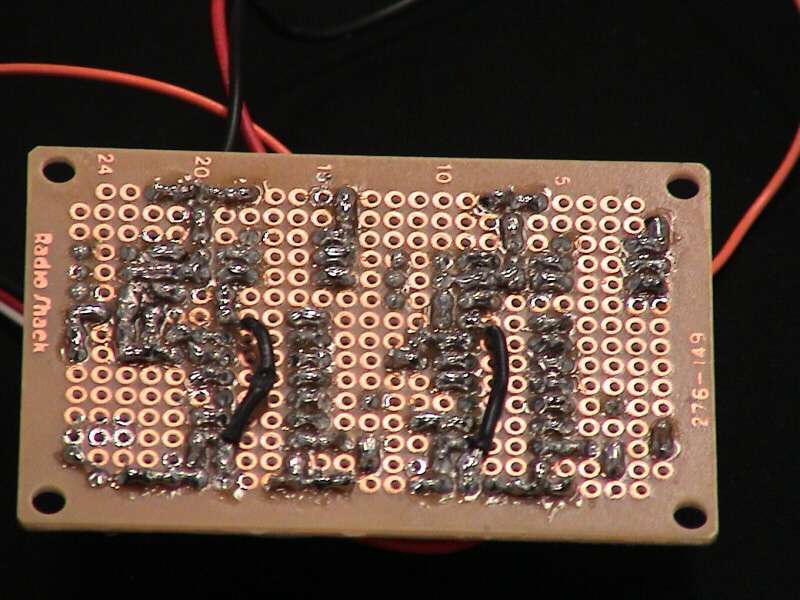 Figure 4.
Electronic Firing Circuit Assembly, Bottom Viow.
To use the circuit, connect the servo lead to an output channel of the radio receiver. Connect a shorting jumper from the middle to one side of each pair of 3-pin headers, J1 and J2. It doesn’t matter which one goes which way, just that they are opposite. Turn on Radio transmitter and receiver. Operate the firing control to the point where you want the turret to fire, and adjust the R4 or R10 trimmer until the associated LED (D1 or D2) comes on. Operate the firing control in the opposite direction, to the point where you want the other turret to fire, and adjust the other trimmer to where the other LED comes on. When the firing control is released, both LEDs should turn off.

To test guns, power only needs to be supplied to the circuit via the servo lead. Press SW1 to fire one turret and SW2 to fire the other, without the need to use the radio.

The circuit needs to be protected from water, and therefore should be installed in the ship’s watertight receiver box. This keeps the circuit conveniently close to the radio receiver as well. For best results, the solenoid valves should be as close to the turrets’ actuators as is convenient. Long hose runs from the solenoid valves to the actuators can cause a little delay between control operation and actual firing, while pressure builds in the hose.